Shape Architecture has carried out many kitchen design projects and continues to do so.

5 Tips for a better kitchen:

Firstly, the kitchen and dining space should be large enough and a typically a simple shape.  This is normally achieved with the addition of a side or rear extension.

Secondly, daylight is very important, and the space should be filled with light from various sources.  This is achieved very well with the addition of large rooflights in any extension and also large format glazed doors and screens giving onto the garden.

Thirdly, an improved connection with the garden both visually and physically is important

Fourthly, once the above context is established the location of the kitchen units and often an associated kitchen island should be set alongside planning for the dining space and possibly further areas for sitting.

Lastly, when working with an architect all of the above can be established and then the location of the various components can be located.  It is at this point that the kitchen design can be taken to a kitchen specialist who will be able to advise on the particular range that will work with the design and assist in selecting unit finish, worktop and other components.  The drawing the kitchen design company produces will then establish where all the electric and associated lighting points should be located.

Here are some great examples that will inspire you:

1 – In the north of London, we created a light and contemporary kitchen and dining space.  The existing plan had already extended into the side elevation and the project was a matter of opening up the interior with the removal of a number of internal partitions.  Large format rooflights were added at the sides of the space into existing flat roofs and a long run of glazed doors to the existing rear elevation, plus an enlarged terrace so that the space could open up onto the garden.  The kitchen units and island are striking and contemporary as is the lighting and all knits together well. 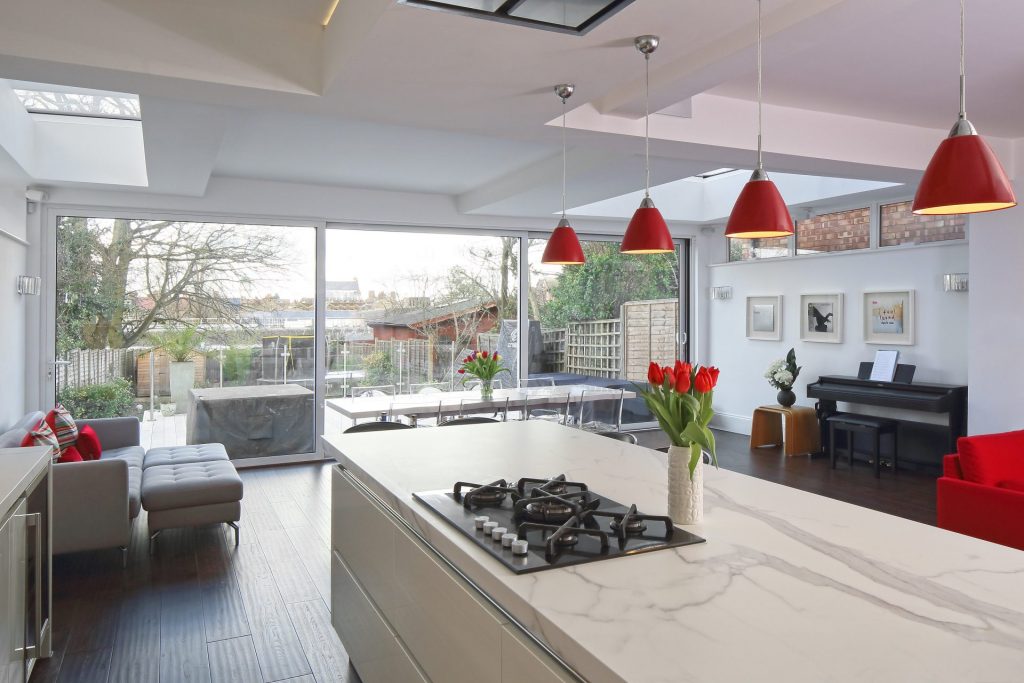 2 – In Fulham we have carried out very many such projects.  Here the ground floor was expanded with a side infill extension and all internal walls removed to create one large space.  The entire roof over the side extension was formed in glass and a full width bi-fold assembly was installed giving onto the garden. 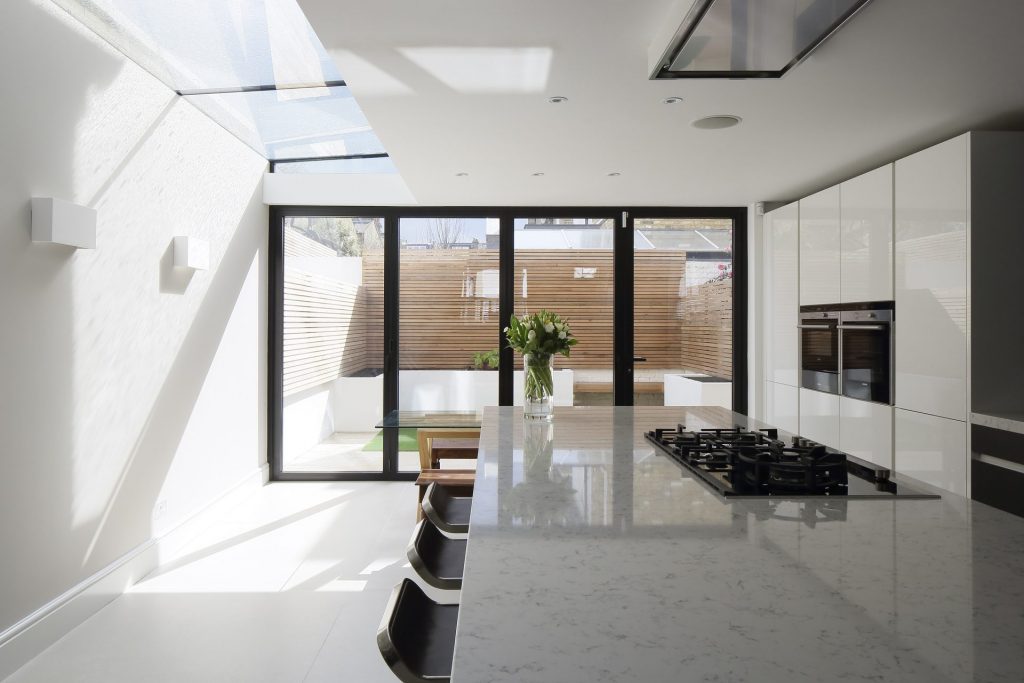 3 – On site in West Kensington we have a project that is the refurbishment of the whole house with the addition of a two-storey glass cube and large format glass doors to the rear.  Here the kitchen, which was located on the first floor, has been moved to the ground floor and as such is far easier to access. Its use and is now linked with the garden space beyond.  Working with kitchen specialists Poggenpohl an elegant and contemporary kitchen has been designed.  The kitchen design was explored in 3D to see the kitchen in its overall setting and then further developed with images such shown here by Poggenpohl Chelsea. 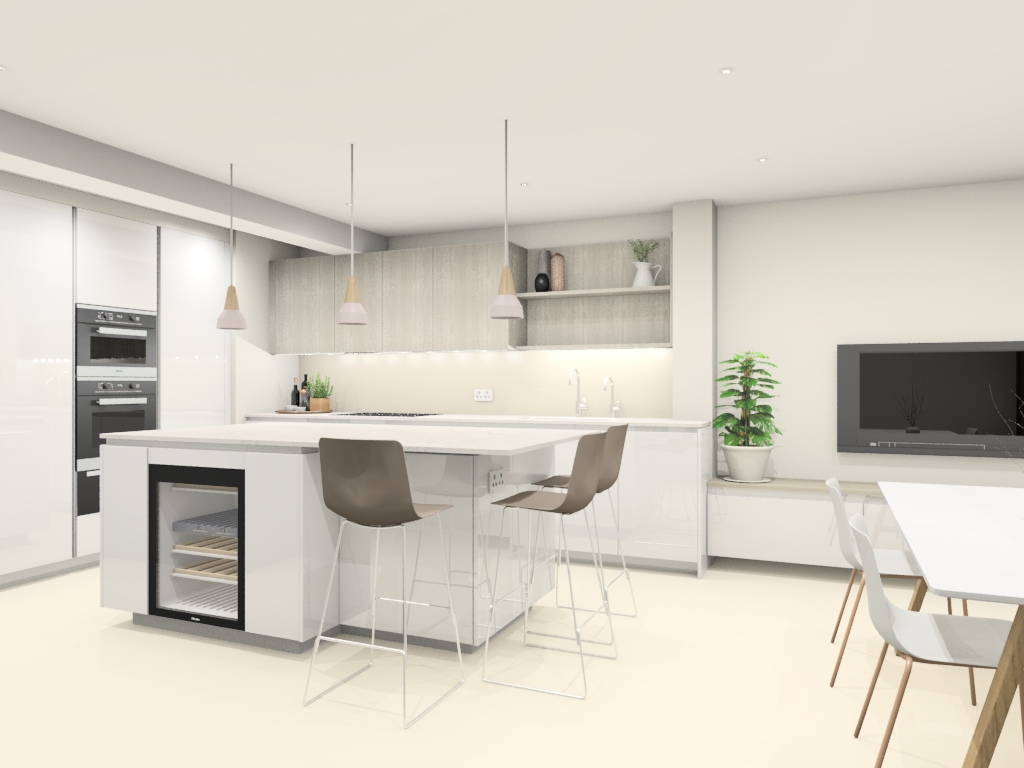 4 – This project in Chelsea forms a new kitchen, dining and living space and each part is zoned rather than physically divided to create one contemporary space.  As with many of these projects a side infill extension was added to form more regular plan shape to work with and set within this extension is large rooflight which ensures the space is filled with light.  The kitchen units flow into other spaces and provide storage to the sitting space.  A long linear kitchen island completes the composition of the kitchen units 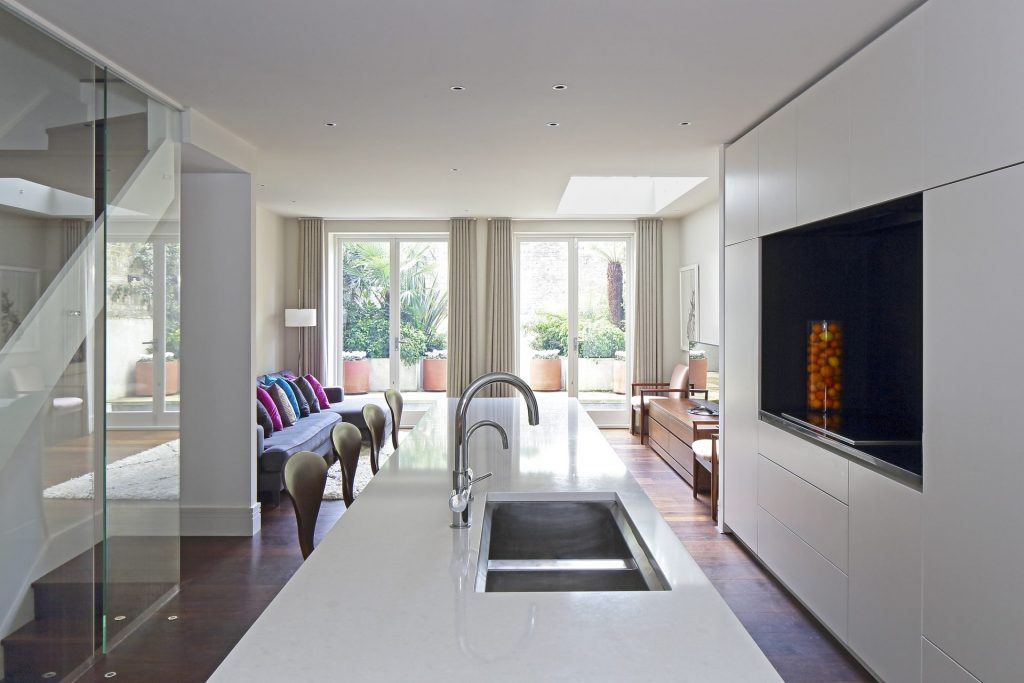 5 – A number of our kitchen projects have been formed as part of a whole house and basement extension project.  This example in Fulham illustrates how natural light is brought into the kitchen space and the link between inside and outside.  The glass panels in the terrace outside provide light into the basement below.  The design of the artificial lighting to the kitchen has also been carefully considered and includes low level plinth lighting and feature lighting over the kitchen island.  Outside light will emit form the glass panels into the basement. 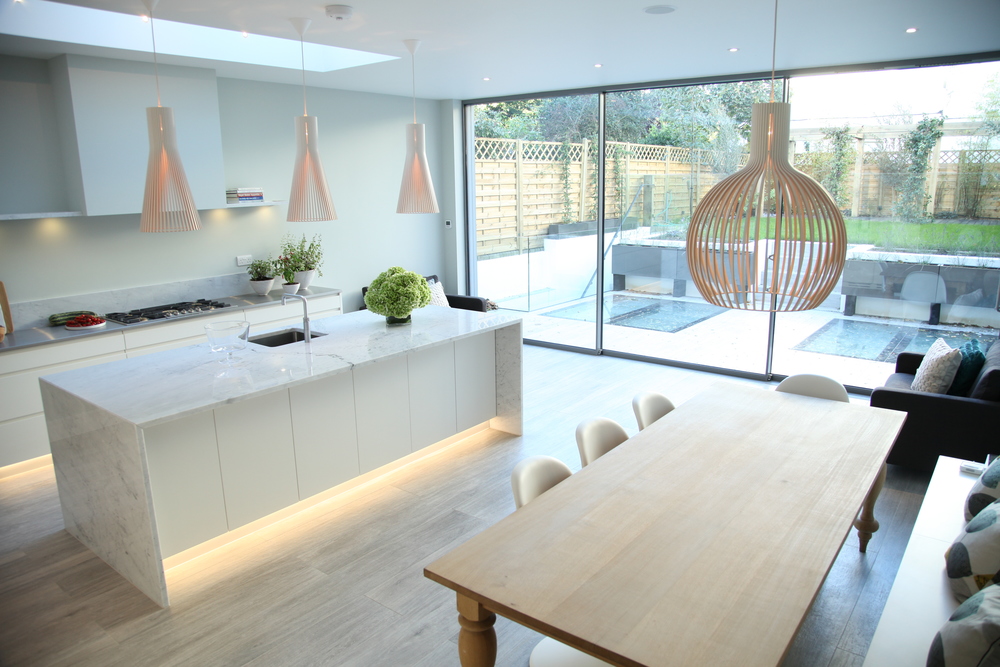