This blog is part one for a series documenting a self-build project undertaken by Robin from Shape Architecture.

The process of building a new home is one that crosses many people’s minds throughout their life. Television shows such as Grand Designs expose the highs and lows of the building process in creating something that truly has been built for the individual’s needs and preferences.

It was never an intention to undertake a self-build project at this point, however, the proximity of the site and unusual nature of the project lent itself to an Architect.

The process of construction beginning in 2017, with the acquisition of land in central Eastbourne, East Sussex.

The land itself was the garden of a residential dwelling. The plot was listed at a local estate agents and the owner had managed to secure planning permission for a bungalow two years previously. Despite initial objections, the council had deemed the land was acceptable for a small residential dwelling.

Existing Level of Development on Garden.

From the outset the project centred on the possibility of achieving approval for a different design, possibly being two storeys, however, a big factor was the adjacent buildings which were historic and subsequently had lower ridges.

The previous owner had carried out extensive development on the plot, with a series of outbuildings, a conservatory and a large extension. In fact, for a garden, there was little to no flora and foliage; the majority of the land  was hard standing. The existing extension had to be removed as part of the sale and this would need to be converted into car parking for the neighbour.

The site was sloped in two directions as the road itself was a hill, again offering design challenges as well as opportunities. The site was small but well located and was close to the centre of town, local amenities as well as near the road, so access was no problem, but space was for welfare and development. The size of the plot was approximately 12m x 12m but was not square, forming a parallelogram. Another advantage was the owner of the adjacent dwelling was very understanding of it being a self-build project. One huge consideration when beginning this scope of the project, even when working with the construction industry, was the timescale. This project from start to finish would take three years.

The site itself was heavily developed.

It was clear the advantage to the site was the location, despite being overlooked. The existing approval for development gave the option for a new scheme. It was an intention on the acquisition of the plot to apply for a revised scheme on the land.

This was raised with the neighbour from the outset prior to purchase and they understanding of this approach. One suggestion for those in a similar circumstance, it is essential to keep the neighbour on-board, similarly, due to the nature of the agreement, we were to undertake work on her property which was duly done as soon as the purchase was completed.

The first action was in demolishing the existing extension for the neighbour. This happened the day after completion, done in great haste, but in hindsight, it would have been more worthwhile to wait and thoroughly prepare all service connections and utilities and plan more before diving in to begin demolition. This level of haste affected the amount of existing area allowed to be removed from the CIL (Community Infrastructure Levy) allowance. Although not really a big concern for me in my circumstance, it is advisable if looking for a sale within three years to thoroughly run through with the council before undertaking demolition. Further elements should have been considered. In this example, the utility and drainage proved to be a key issue which itself required more attention than was given at the initial stages.

Moving forward we would advise on the first process being applying for utility connections, although this was carried out, it cannot be stressed how important it is to chase and ensure that the utilities are lined up ready to be installed.

An existing doorway was closed off temporarily to close off the resident’s house from the building works.

The demolition process started with a strip-out of the existing extension. Fortunately, there were no real issues in this stage. Most of the internal timberwork was stripped and equated to one skip’s worth. This was an area I was happy to work in. To save costs, I worked with a local contractor and a labourer to progress the works. Having the experience of a tradesman was very useful. Most of the work was straightforward and was simply a case of breaking up material in a careful manner, but having experienced hands around the site made for quick work in many cases.

The roof was carefully stripped to maintain the existing tiles. Where an abutment between the original building and extension was in place a parapet had been built with a lead gulley. The lead was carefully preserved and fetched a good price in scrap. The parapet was removed and the eaves were lowered to take the existing tiles that were retained. 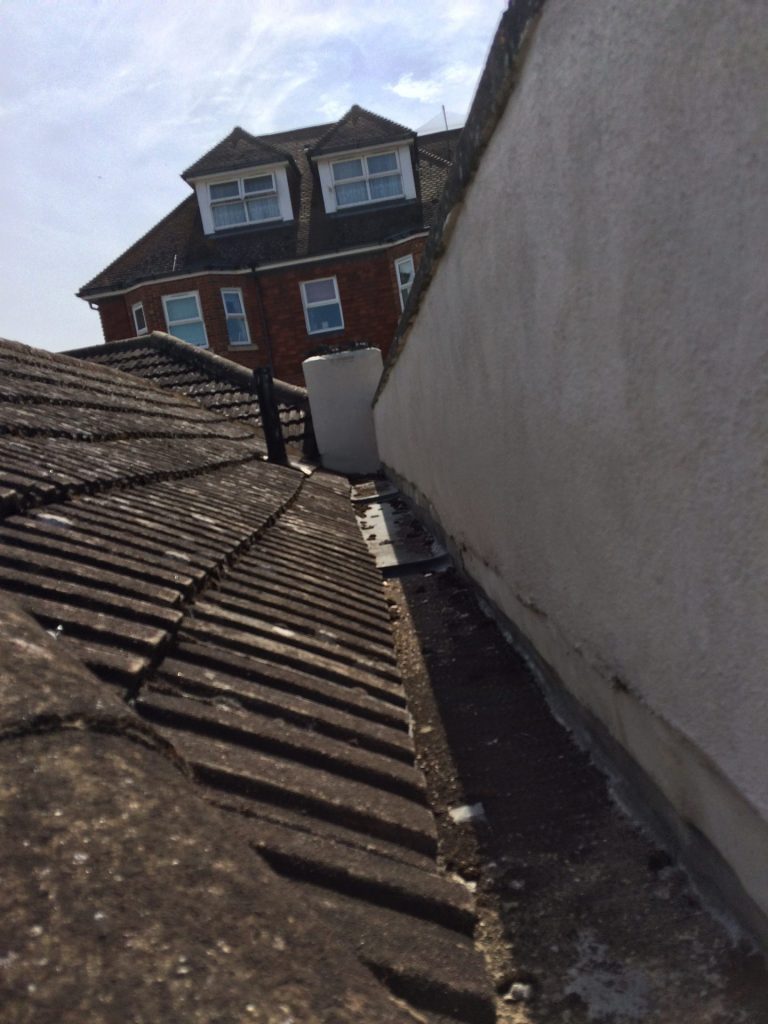 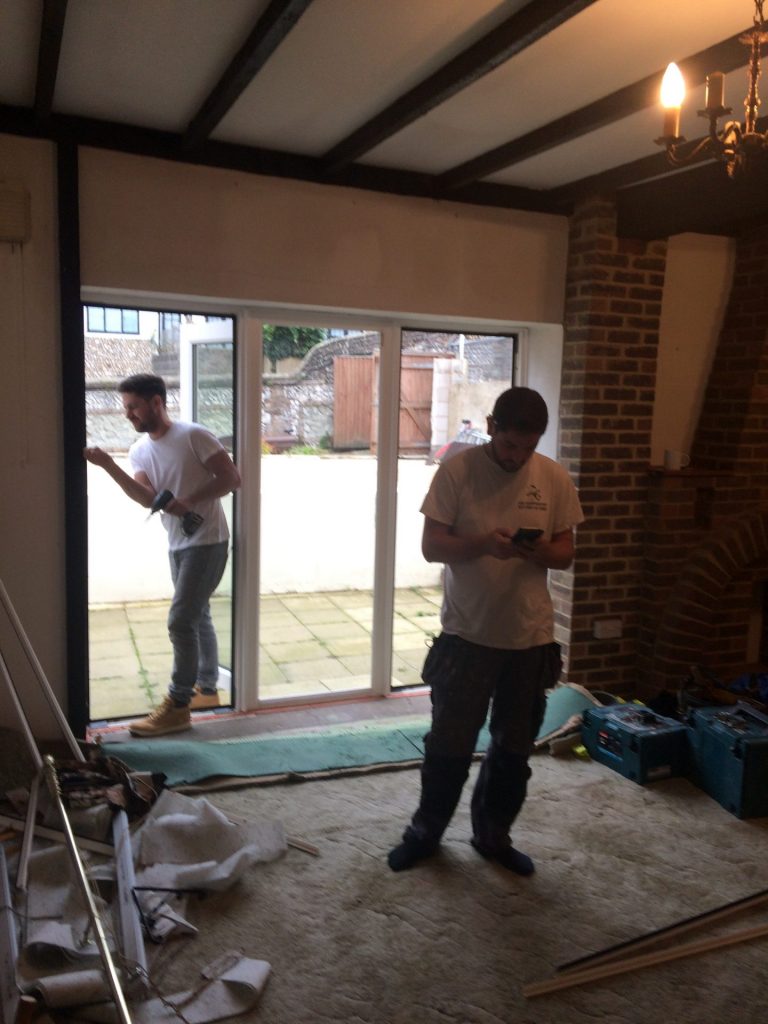 There was steel in place which had to be carefully removed. This was done with a further labourer from a height. All the metalwork was recycled at a local scrapyard in stages. With the building down, the site was covered in rubble.

The contractor proceeded to use a tower to extend rafters and install eaves in line with the original building. 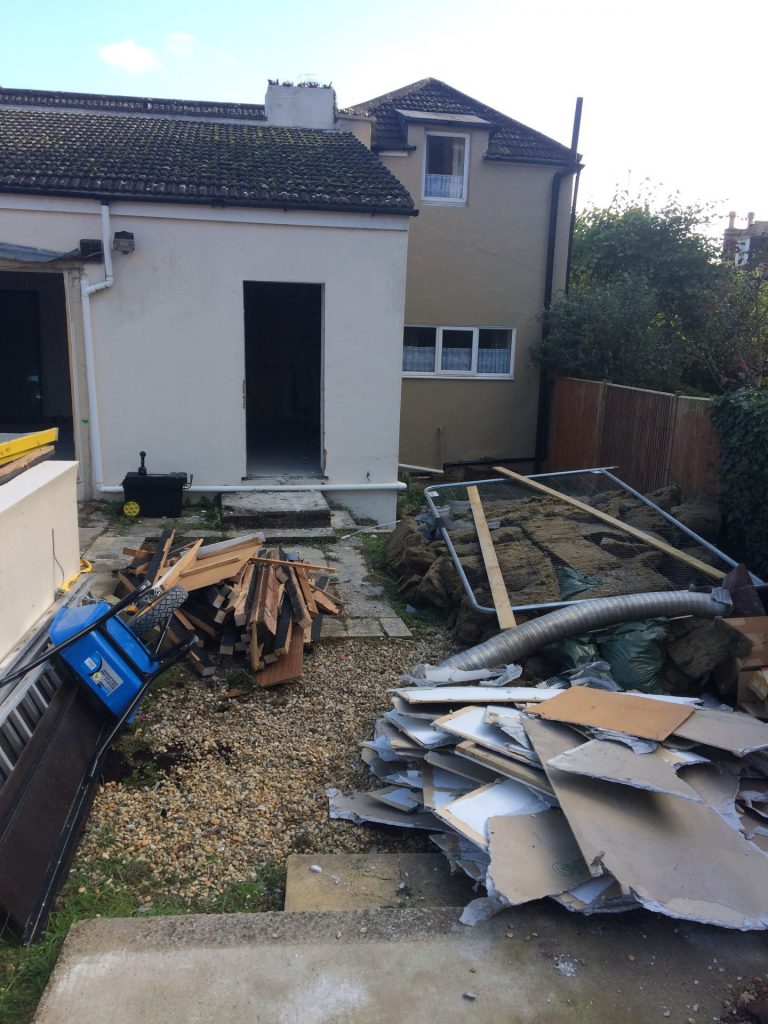 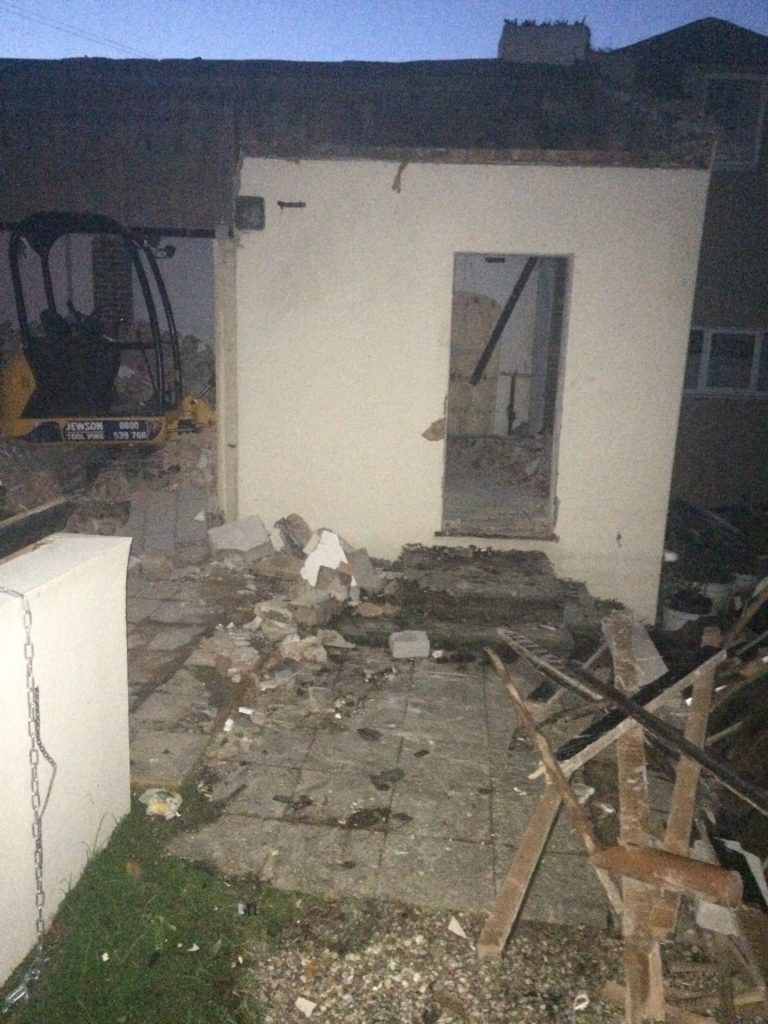 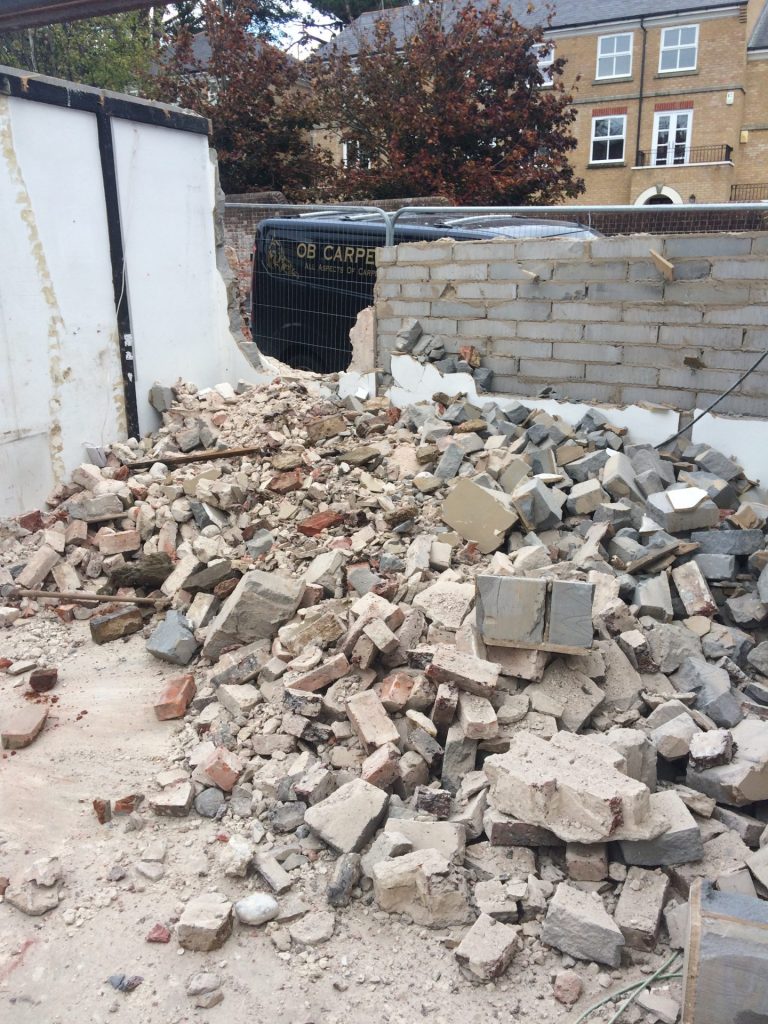 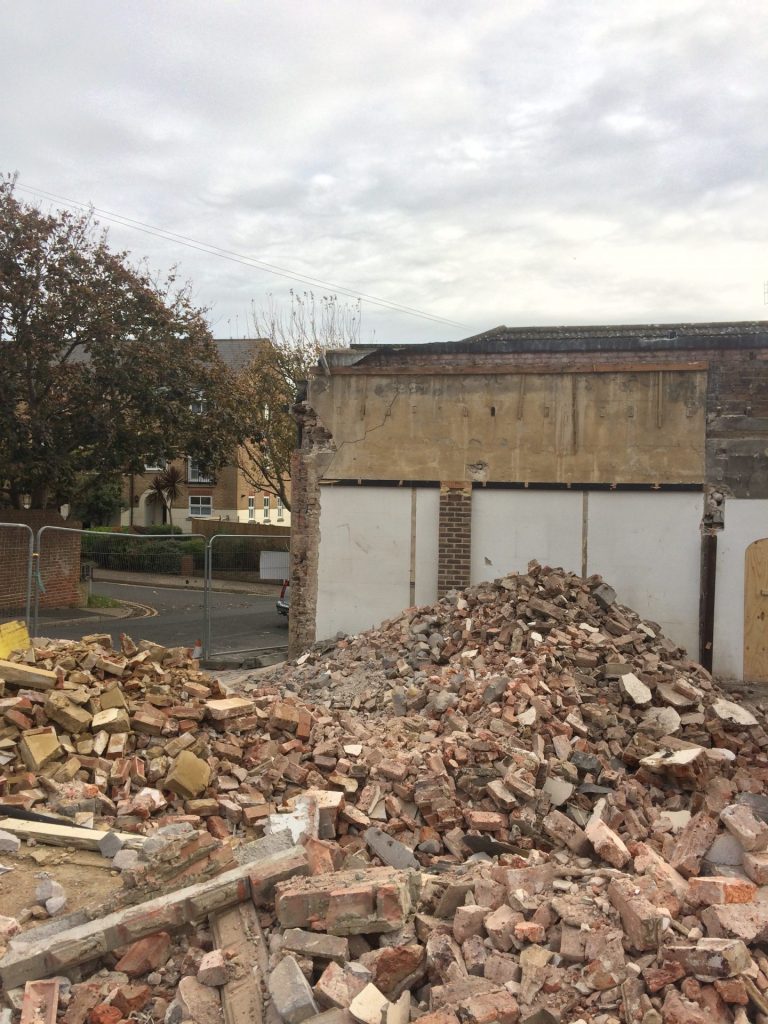 The initial contract for completion of making good works was concluded and the next stage was continuing with the muck-away to remove further hardcore material. Join us in Part 2 where we discuss excavation works. 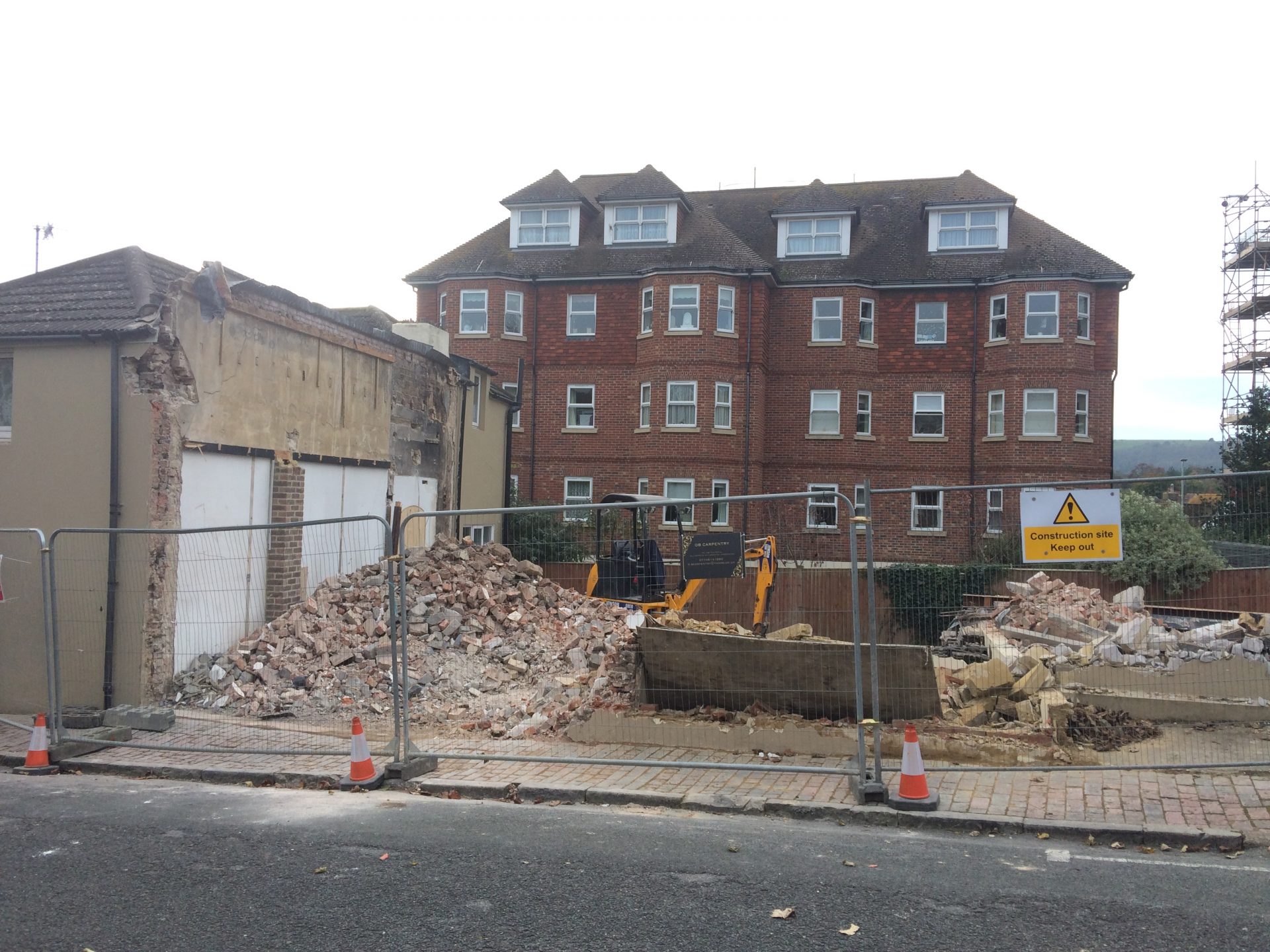 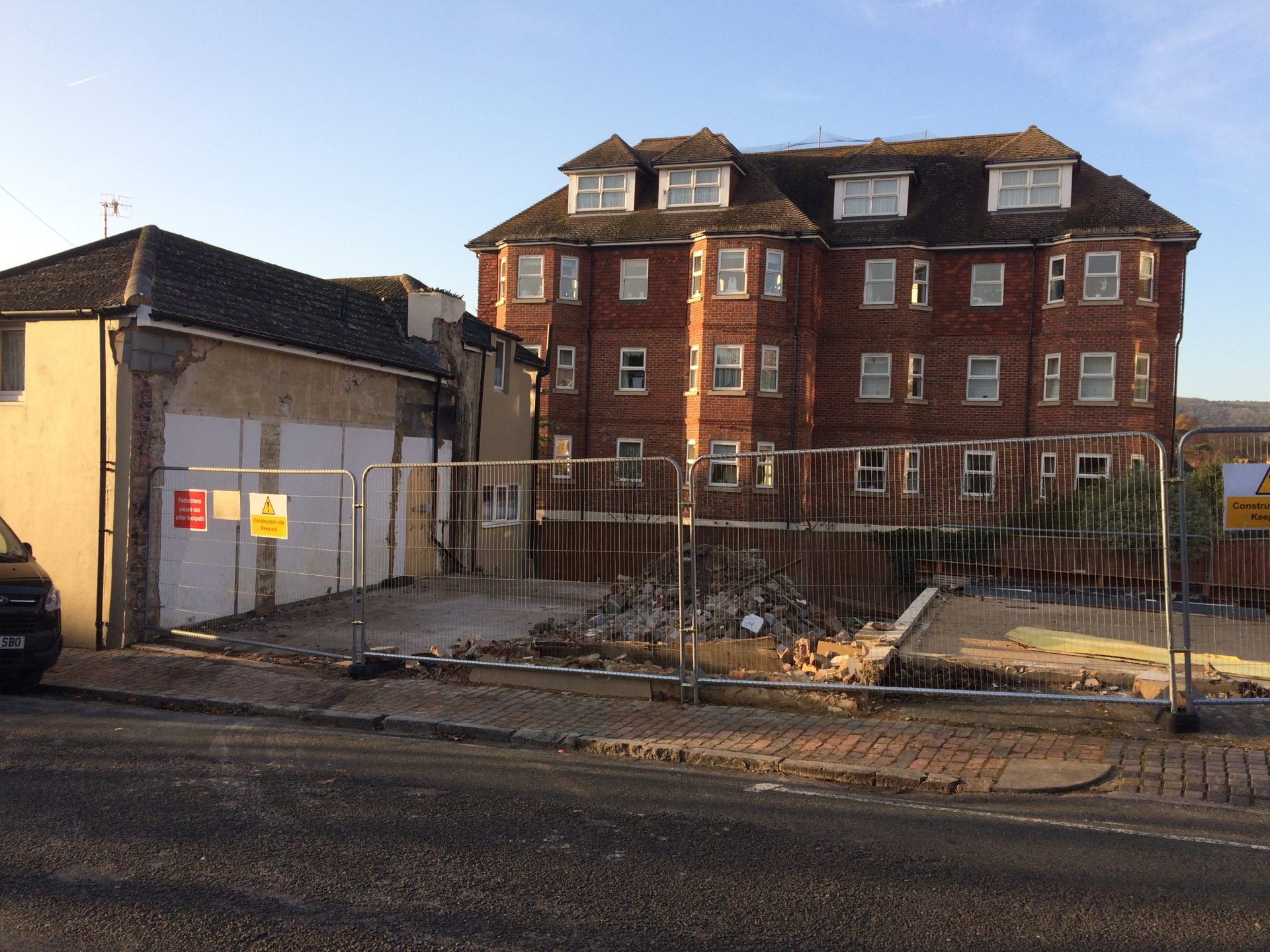