This blog is part two for a series documenting a self-build project undertaken by Robin from Shape Architecture.

Following on from Part 1 of the self-build series, in which much of the existing extension was removed, Part 2 centres on excavation to remove spoil from the site.

Large mounds of material from the existing extension were present on-site, and below this large amounts of concrete were in place as footings to existing outbuildings. The main aim of this process was to remove all hard standing material from the site.
Economically this process was one that I felt I could undertake. Although requiring a level of care, at this stage of the build, away from finishing and without the need for a good level of finesse, being able to undertake this was a good money saver. 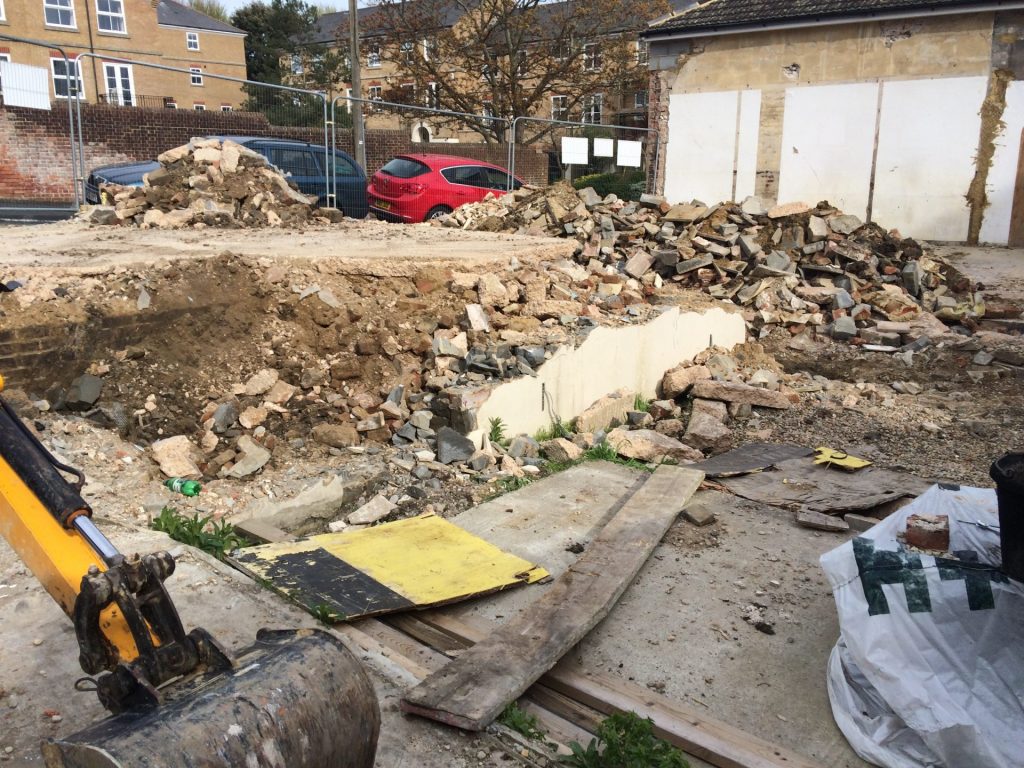 During the process, a relationship was formed with a local skip firm that allowed the excavated material to be carried away. The load was removed with grab lorries removing 18 Tonnes of material at a time. Despite this seeming ample to remove a lot of spoil, in reality, it required approximately 20 pick-ups to remove the existing hardcore. At one point the pile of hard standing was significant. 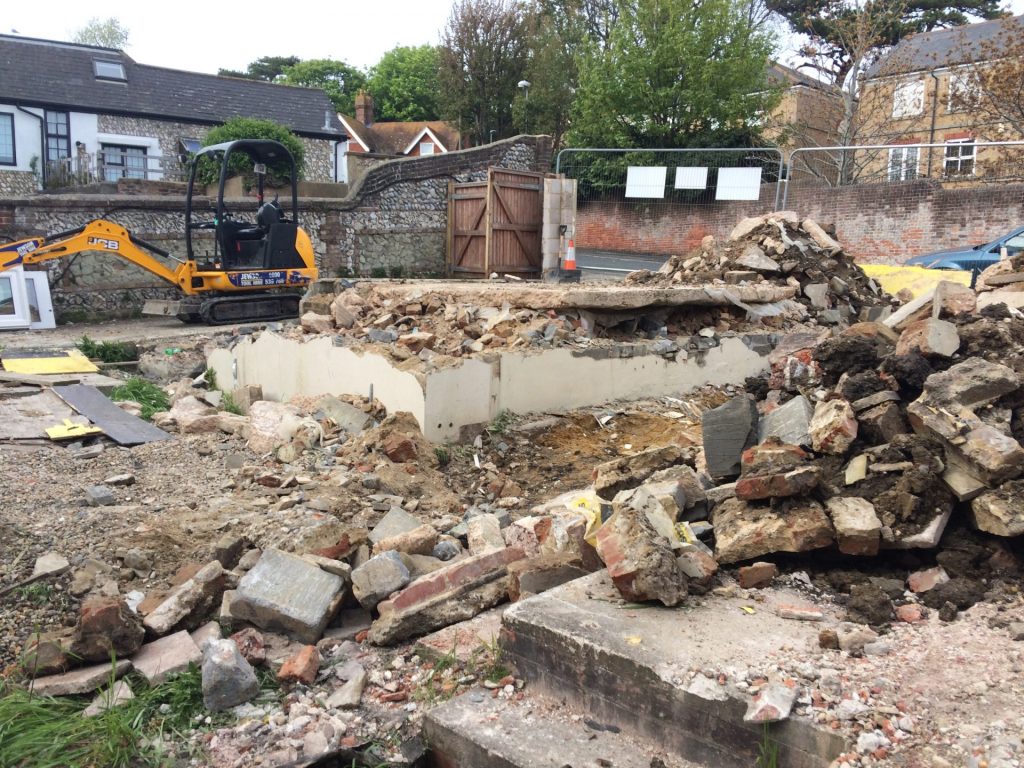 A big skill through this project was learning to use a JCB. The first course of action was to hire out a JCB from a local building supplier. This initially was a 1.5T machine but contained a pecker /breaker attachment. Due to the nature of the project, a small nimble machine was useful to be able to break up large slabs and elevations of brickwork but was often unnerving in manoeuvring on mounds of material as the machine felt more incline to move off-axis.

“One great by-product of a self-build is the engagement that happens with various specialists in all fields of construction. This proves an invaluable and hugely rewarding experience. It is always satisfying to bring people on the journey with you and learn a lot on the way.”

A friend of mine who had experience with excavation machinery came down to teach the process of operation. Originally it was alien, but after an hour or so felt very natural and did not require too much attention in operating the boom function and moving the cab. Breaking up all existing material was time-consuming and took approximately a workweek.

There were also requirements with the grab lorry to minimise the size of hardcore for pick-up, so material often needed to be further broken down. In larger-scale projects, more material can be loaded onto skip lorry’s with a separate plant loading, but in this case, a grab lorry was needed to load material which limited the load and carry capacity.

The next stage, once much of the hard-standing was broken, was to progress to a 5T machine. This was a different level of machine which made light work of moving spoil, and much of the hard-standing was easily dealt with. It has to be said this was an enjoyable experience following working with a 1.5T machine. The machine felt more assured on the ground and was less inclined to roll and move off axis. The sheer power and prowess of this made for real progress at a very quick rate. Large slabs could be picked up and easily and broken through raising and dropping. At this time, shuttle runs were organised with the muck away company and piles of material were continually removed and repopulated ready for the next muckaway. 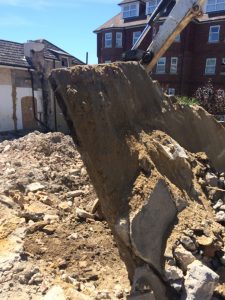 A 5T Excavator was used to help remove spoil from site. 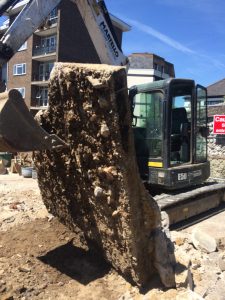 A 5T Excavator was used to help remove spoil from site.

Towards the latter stages of the process soil started to be mixed into the hardcore, despite being  a positive as less material was above the surface of the ground and this part of the project was nearing conclusion, a concern arose from the cost of muck-away. 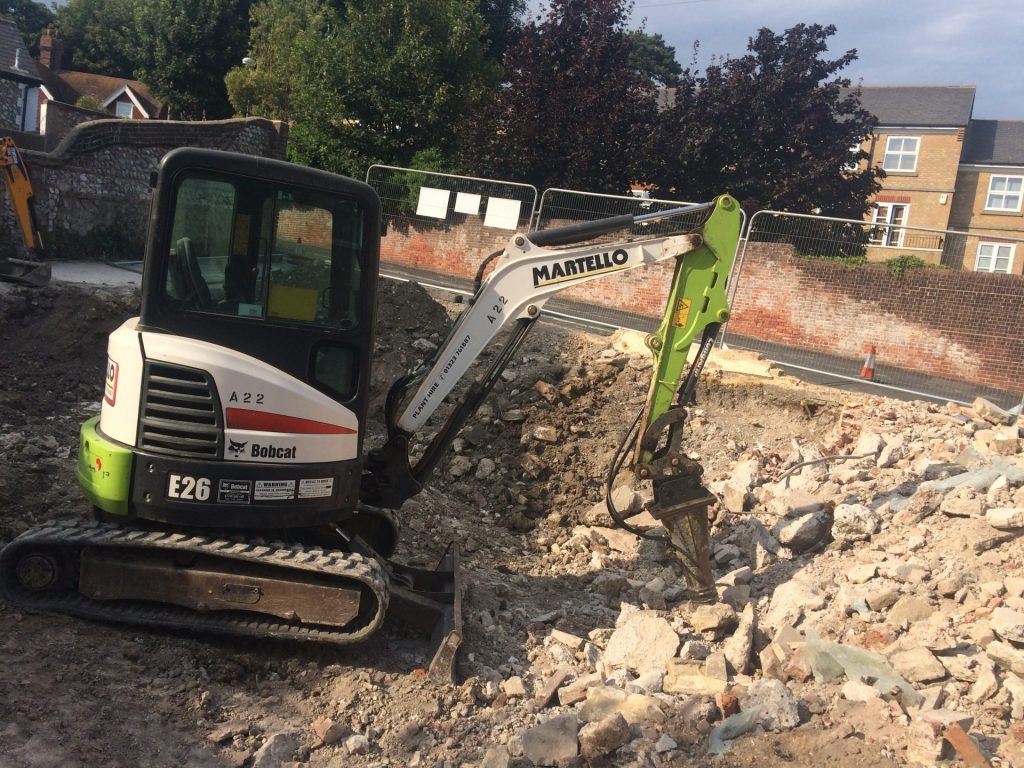 Mixed hardcore with soil was more costly to move and care had to be taken to avoid picking up too much mud in with the hardcore. This became a test of a newly learnt skill to reduce the depth of excavation when forming piles and provide more control in how to lift material. 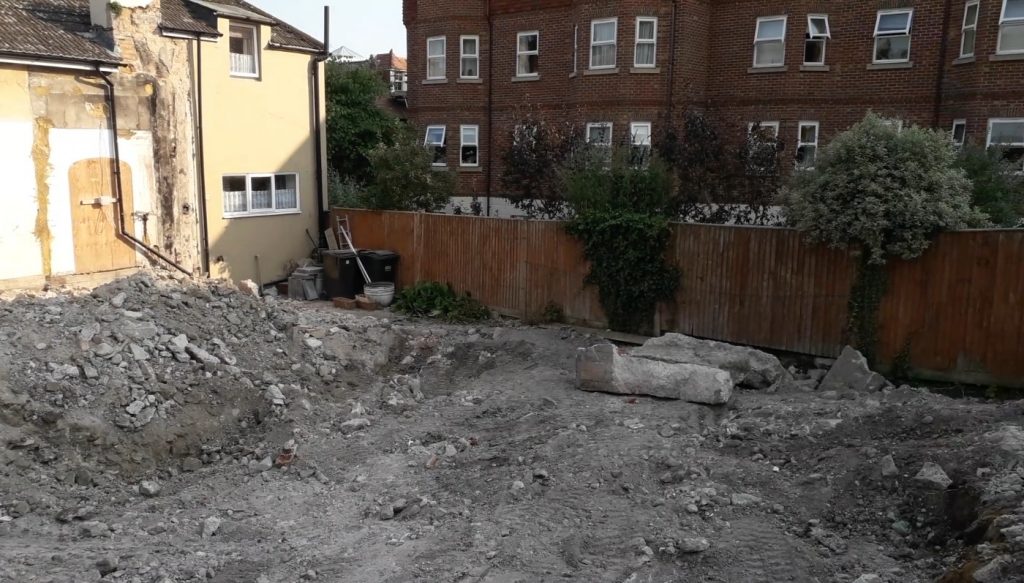 Eventually, a level of hard-standing was left to allow the ground worker to take over and continue to the next stage of the project. Join us next time where we look at the planning process involved in bringing this project into fruition.