This blog is part three for a series documenting a self-build project undertaken by Robin from Shape Architecture.

Following on from Part 2 of the self-build series, in which much was on excavation and site preparation, Part 3 centres on moving into the design process.

Whilst undertaking demolition and site set-up, the design process ran in parallel. As the house was a personal project a large amount of time was spent in achieving a design that suited my lifestyle, had an architectural interest and aesthetically had kerb appeal.

The original application was for a bungalow so initial ideas revolved on developing the existing bungalow footprint by going up into the loft area. A problem, however, arose when after spending further time observing the planning drawings, it was clear that the existing approved bungalow wasn’t feasible. The inherited planning approval had not made allowance for the slope of the land, meaning that at the rear of the house there would be a significant height difference. Two elements that stood out with the initial design was the build-up of height at the rear.

The site was sloped front to back, and this the rear of the property was significantly lower. By entering on one level in a bungalow, the back of the site would need to be significantly increased in height. Furthermore, an existing historic wall would require demolition. This was a feature of particular interest to me and one which I wanted to preserve. For me, this was not a good approach and a shift began in the design process to explore massing to achieve a two storey building. 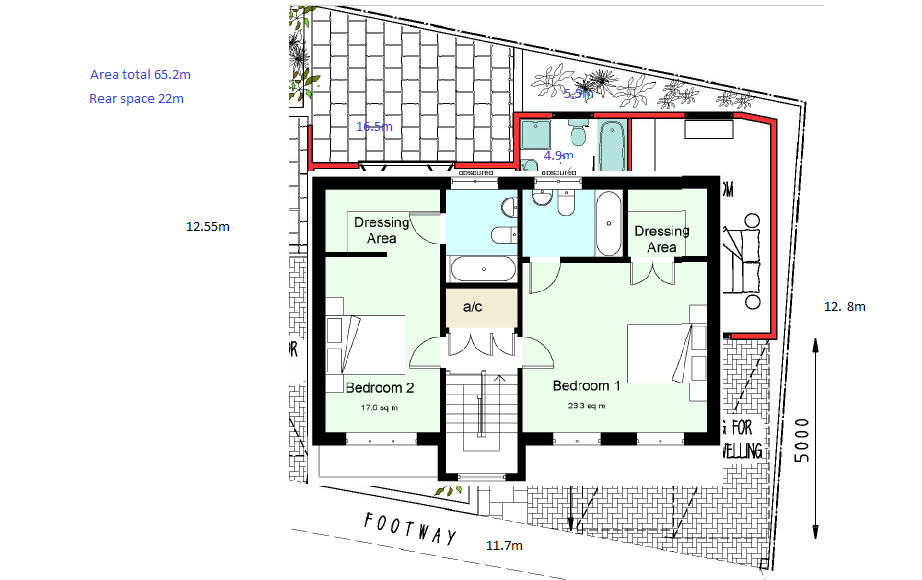 The first approach to any design process is establishing parameters and context. The site was awkward and presented many challenges in both footprint and height. It was essential to carry out a topographical survey to understand how the levels were working both concerning existing rooflines and ground levels. At Shape Architecture we advise all clients to undertake the highest level of survey possible. (Please see our blog showing 3D scanning being used within the practice)

A key element that was included in this survey was also the heights of the neighbouring ridges. This proved to be essential information as it served as a top datum to help establish key levels in the design phase.

Working on massing and concept layouts was often frustrating but also incredibly enjoyable. The problem solving nature of the task is something that as architects we enjoy undertaking and despite being challenging it was a wonderful opportunity to introduce something attune to the surroundings whilst still following modern principles.

Initially, basic drawings were sent to the council’s ‘Pre Application Service’. This service, which often costs more than a planning application, is a chance for informed feedback from the council to ensure you are working on the right lines.

Finally a design was submitted to the planners pre-app service. In hindsight, this design was radical and leaned towards overdevelopment, but often in these circumstances, it is advised to ask for more, with the expectation that a compromise will be found later. The feedback on this design was primarily negative, sighting issues with visibility splays, building massing and height. In fact, in principle, this idea was not well received at all. However it is important to realise in this case that actually a lot of principles worked with this design and with all these projects hurdles have to be overcome to help achieve the project potential. These things are never plain sailing.

A key recommendation for many of those undertaking projects of these nature is the writer and self build guru David Snell. David has self built  14 houses and has a wealth of experience. I was fortunate to meet David personally at the Self Build Exhibition and would cite the moment as being pivotal in enthusing me to not only continue with the endeavour but enjoy the experience. It is easier said than done at times, but overall building something from the ground up should be rewarding. It is no small feat and contains numerous challenges but duly the satisfaction should also be high.

It is easy to give up at relative refusal stage and move on to the original design but out of passion, this was not an option. At Shape Architecture we always push for the best outcome possible. From that point, further and further design developed with close family, colleagues and I to help formulate a better option. It cannot be overstressed how important context should be in designing buildings. I often found myself alone on the site simply observing and getting a sense of the feeling of the place. The design process, I believe, should be immersive and walking up and down the road proved a wonderful exercise in allowing me to find a grounding in the building methodology. There was a lovely variety of building styles locally that were themselves very non-typical and it made me realise that this should be the rich vein to follow with a design approach.

The square footprint meant that it was hard to find a way to balance the elevation without it appearing too ‘boxy’. The methodology of working with gables to match neighbouring buildings started to take prominence in the design principle, and more and more designs worked based on overlapping gables allowing a lower ridge height with skeelings and vaulted ceilings where necessary on the upper floors.

A key consideration was the point of access at the front door, it made sense to put the front door on the highest point and then the natural transition at that point was to make the hallway a half landing, with a lower ground floor cut into the slope to form. This paradigm opened up the whole principle for the final design.

With some further tweaks a proposal was devised following advice from the planners in the initial pre-application service.

An application was submitted to the council which included various pieces of documentation. At Shape Architecture we are experienced at planning application submittals. The application submittal included existing and proposed drawings and a thorough Design and Access Document which listed all the benefits of the proposal in accordance with core planning policy. It goes without saying that with all planning applications an understanding of core planning policy is of paramount importance. It is something I was used to in the office environment. Despite some objections, as can be expected for any type of development, generally the feedback from the planners was very positive and it achieved approval on the first attempt. The journey in securing planning approval looking back was difficult but rewarding and at that point became excited in the fact that the design being built was personal and not inherited by another party.